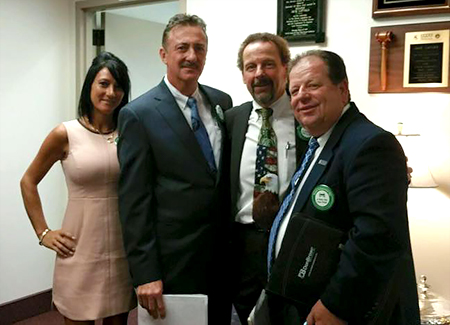 FLA President Rick Versace of A1A Airport & Limousine said that more than 150 operators swarmed the capital to meet with their respective legislators and discuss the public safety hazards that accompany TNCs, thanks to the newer companies’ model of less stringent insurance requirements and background checks. According to Versace, TNCs are trying to pass state legislature that would circumvent local jurisdictions, making it so companies like Uber and Lyft won’t have to apply to operate in each individual county.

“The rally was an attempt to educate our lawmakers about some of the issues surrounding the TNCs and also to indicate to them that you can’t legislate on a statewide basis if there’s no enforcement behind it,” said Versace. “We had appointments setting up everyone with their own elected officials, so we had a full schedule. Everybody in the capital knew we were there. It was a very well-done, well-executed event and we’re very happy with the outcome.”

The day’s agenda included a news conference held just outside the Tallahassee Capitol building, which presented facts about the day’s meetings to news outlets ranging from local to national media.

“Once Uber found out that we were having a press conference, they attempted to short-circuit it by holding one inside the center office building with senators and a big Uber sign—it was almost like a commercial for Uber,” Versace said. “But it helped us rather than hurt us because all anyone had to do was go downstairs to get the opposing point of view. The capitol press corps was there and every major news outlet was there. We ended up getting about three times as much press coverage as we probably would have been able to get on our own, so it really backfired for them.”

Given the success of March’s “Rally in Tally,” many Florida-area operators are returning to the state capital April 8, and will continue meeting with state officials on a smaller scale for the remaining few weeks of the current legislative session.

“They’re holding Miami-Dade County Days, so we’re meeting with Miami and Tampa Bay-area legislators,” said Versace. “For every week that’s left, we’re going to be up there. We’re letting our elected officials know that we’re not going anywhere: We have better public service, better customer service, and a more personalized relationship with our customers than anonymous drivers do.”

To finance its ongoing lobbying initiatives and PR campaign, FLA has established a “Join the Fight” page on its website, floridalimousine.com, which can be found in the drop-down menu under the site’s “UBER” tab.