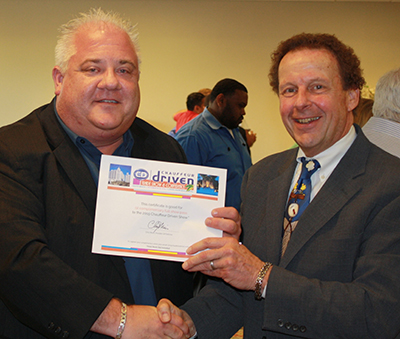 Show pass winner Dave Erdman (left) of Executive Car Service with Chauffeur Driven’s Industry & Brand Ambassador Philip Jagiela Dallas — The allas/Fort Worth Limousine Association (DFWLA) held its first meeting in more than a year at the Hilton Anatole Hotel on April 8. Chauffeur Driven’s Industry & Brand Ambassador Philip Jagiela was among the nearly 40 who attended the meeting, much of which was spent discussing local ordinances, TNCs, and plans for the association.

With current members comprising about half of the meeting’s attendance, President Richard Weiner of Carey Dallas emphasized that membership in the association is critical in order to participate in, be engaged in, and assist with DFWLA’s present and future initiatives.

An array of ordinances pertaining to operations in Fort Worth, Dallas, and the Dallas/Fort Worth International Airport were discussed. Fort Worth’s ordinance is being completely rewritten, and Dallas’s will be undergoing quite the overhaul, too: the current age and mileage restrictions on vehicles will be removed; the 31-Point inspection will be mandatory but can be performed at a number of approved locations throughout the region; all documentation can now be submitted online; and a revision to longstanding regulations will treat all ground transportation services, including TNCs, equally.

Additionally, the airport will begin accepting permits from surrounding counties. The parking fees it imposes on livery services will still be higher than those it charges the general public.

During the meeting, Jagiela spoke to members about Chauffeur Driven’s upcoming events and raffled off a pass to its Miami show, which was won by Dave Erdman of Executive Car Service.

The association will be holding elections at DFWLA’s next meeting, which will be in May with the day and time to be determined.