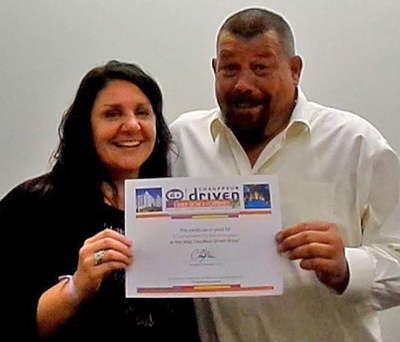 After both the treasurer and secretary’s reports, the discussion turned to vehicles—focusing on where members purchase theirs, as well as new models and trends for the industry. In addition to comparing the new Cadillac and BMW livery offerings as well as weighing the pros and cons of Mercedes-Benz Sprinters versus Ford Transits, members showed interest in inviting manufacturers to a future meeting.

In light of current events, Detective Sergeant Eric Tellefsen of RDU gave a presentation on how to respond in case anyone finds themselves facing an active shooter situation in an office or public place. He showed a brief video (which can be viewed at fbi.gov/about-us/cirg/active-shooter-and-mass-casualty-incidents/run-hide-fight-video) that explained the “Run, hide, fight” hierarchy of reacting safely to any violent situation, and discussed how first responders are trained to both handle and diffuse a shooting.

Tellefsen, a retired cop, also covered what to do if a chauffeur is present during a situation at the airport. He advised that they should get out as quickly as possible, especially since the airport will shut down anyway, and that an individual should always take the opportunity to run in any dangerous scenario. He added that it’s in an individual’s best interest to not engage a shooter or assailant, unless it’s a last resort in self-defense.

A TNC update addressed how nearby Virginia has created a new legislative category for TNCs, and that all commercial transportation vehicles operating locally must have the correct permits and identifying license plates. While the area has seen a decrease in TNC drivers, nearly 40 of them have started playing by the rules; however, some continue to fly under the radar by shirking commercial vehicle requirements. RDU is reported to be the only airport in the area that is still ticketing those drivers who are ignoring regulations.

Before the meeting adjourned, Battista raffled off a pass to Chauffeur Driven’s Miami show, which was won by Eric Bohn of EcoStyle Transportation.

NCLA’s next meeting is scheduled for June 16.