NLA Issues PSA, Has High Hopes for Day on the Hill 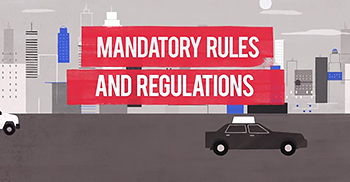 Announced earlier this month, the PSA quickly garnered not only a receptive audience but also a positive response from the chauffeured ground transportation industry, according to NLA President Gary Buffo of Pure Luxury Transportation.

“Within about an hour of its release, we already had more than 300 views, which was absolutely astronomical,” he said. “We have had nothing but kudos from the majority of people on our board and certainly a large number of the NLA membership.”

The “Think Before You App” video, which can be viewed here, echoes many of the safety issues that have been concerning traditional livery operators, especially in regard to the riding public’s safety. Statistics gleaned from NLA surveys—such how 91 percent of Americans feel that there should be mandatory rules and regulations in place for TNC drivers, and 83 percent believe that the drivers of ride-hailing companies should undergo a criminal background check—are also included in the minute-long PSA.

The video comes as an effort to reach the Millennials who comprise much of the TNC user base, as well as elected officials.

“We’re very hopeful that someone from the Millennial generation will help it go viral,” Buffo said. “We have already started the process, through not only our membership but also our friends, families, and everybody else associated with us, of trying to get it hand-delivered or emailed to our local politicians around the country—and around the globe, for that matter. If our elected politicians can view it, they may just be able to really understand what they’re allowing to happen—not just on a federal level but on a regional level.”

The TNC discussion will continue with the NLA’s annual Day on the Hill, which will formally take place June 10 but will have events also occurring June 9 and 11, too.

“We are truly focused on really having the best Day on the Hill we’ve ever had in the history of the NLA,” Buffo said. “We’ve got a lot of key talking points that we’re going to be bringing up there. We’re also going to be doing a Day After Day on the Hill, where we’ll do a PR/lobby session just to make sure everybody is on the same page. We really need to focus on delivering a single message on a daily basis for our lobbying efforts through a PR stance.