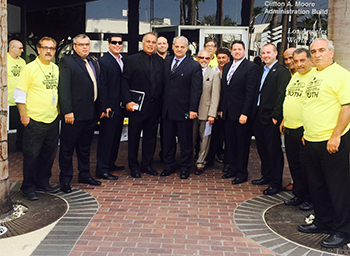 Members of GCLA, NLA, and the local taxicab industry represented traditional ground transportation companies at the recent hearings Los Angeles —Members of both the Greater California Livery Association (GCLA) and National Limousine Association (NLA), as well as their supporters and scores of representatives from the taxicab industry, convened on July 16 to voice their dissent at a hearing to decide whether LAX would allow TNCs to pick up passengers on airport property.

Despite the protests and presentations from traditional ground transportation operations, airport commissioners unanimously voted to allow the proposal, which, should the airport and city attorney approve it, will go into effect at the end of August.

GCLA President Kevin Illingworth of Classique Worldwide Transportation, GCLA 2nd Vice President Perry Barin of Music Express Worldwide, and NLA board member Ron Stein of Exclusive Sedan Service were among those who spoke on behalf of chauffeured ground transportation at the hearing.

“The public and regulatory interaction with TNCs continues to suffer from misperceptions that affect the safety of the public, the consumer’s rights of the passengers, the fair treatment of TNC drivers, and the fair application of laws for bona fide operators of passenger transportation,” Stein said in his presentation to the LAX board. “The NLA is opposed to treating TNCs as if they are outside of the traditional passenger transportation industry and thus exempt from having to comply with legal and insurance requirements that are designed to protect passengers and the public. I urge you to defer action today.”

Though they implored the board to consider voting down the proposal—as did roughly 50 of the 62 individuals who spoke out against TNCs at the hearing—Stein said that it seemed like the contingency walked into a losing battle.

“They had had a closed-door meeting before the hearing,” Stein said. “It was pretty obvious that it was a foregone conclusion: The first clue was when one board member got up and recused himself right at the beginning. You could see it in their body language.”

In addition to TNCs being granted pick-up privileges, they’ll also have to start paying the $4 pick-up and drop-off fees LAX requires. The proposal also mandates that geofencing will be utilized to determine when TNC vehicles enter and leave the airport property, which will prove that the likes of Uber and Lyft are reporting numbers that match what their apps report.

Stein says that this is “a little bit of a setback” but that GCLA will continue to fight for the state’s operators.

“We still have to fight,” he said. “We have to continue on. At some point in time, the PUC needs to step up and say, ‘Hey, LAX, what are you doing? You’re still part of the state.’”

The association’s next event will be the GCLA Expo and Trade Show on September 24.