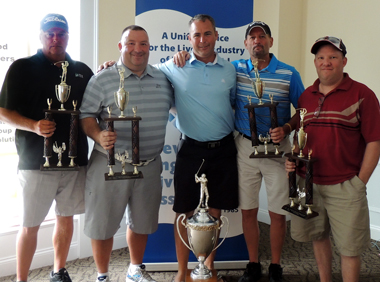 NELA President Mike Callahan (center) of Able Limousine stands with the tournament’s winning foursome, which comprises members from the Able team Marlborough, Mass. — On August 18, The New England Livery Association (NELA) once again took to the Marlborough Country Club for its 16th Annual George Colarullo Memorial Golf Tournament. Nearly 80 golfers turned out for some friendly competition on a blisteringly hot day—though the soaring temperatures and stifling humidity couldn’t put a damper on the generous spirit that the event fosters.

The yearly golf outing may have seen a decline in attendance from last year’s, but industry participation came from as far west as California and as south as Virginia, with members from the Chosen Payments team and Glenn Stafford of Love Limousine among those who traveled to New England to be a part of the fundraising tradition. Along with a committee of volunteers, a number of sponsors also contributed to the tournament, including Chosen Payments, Lancer Insurance, and Mercedes-Benz of Shrewsbury.

Bearing the name of a NELA founding member, the annual event also honors one of Colorarullo’s sons by donating a portion of the day’s funds to CHIPS House, the facility where he has been residing since a motorcycle accident left him with a brain injury. While proceeds from the tournament also benefit NELA itself, the association decided that One Mission, a foundation that assists families of pediatric cancer patients, would be among the day’s beneficiaries, too.

While not all of the big-ticket prizes were snapped up this year, Ricky Bates of Dav El/BostonCoach boasted the day’s longest drive and one of Able Limousine’s three foursomes emerged from this year’s tournament with the best score.

Next up for NELA is its fall quarterly meeting, which will be held September 9.