PRLA Continues Its Fight Against TNCs 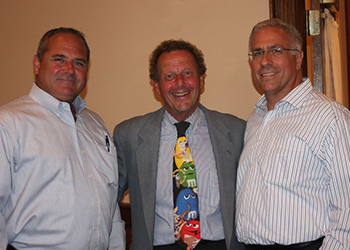 L to R: Steve Bufe of Wolfington Body Company, CD’s Philip Jagiela, and PRLA Director Anthony Onorata of Anthony Limousine King of Prussia, Pa. — After a month’s break in its meeting schedule, the Philadelphia Regional Limousine Association (PRLA) regrouped September 9 at Maggiano’s Little Italy, where CD’s Industry & Brand Ambassador Philip Jagiela and Editor Madeleine Maccar were among approximately 30 members and supporters in attendance for a meeting that covered a range of topics.

The meeting kicked off with Jagiela discussing the rapidly approaching Chauffeur Driven Show in Miami, and noting how present PRLA member Alan Candeub of Park Avenue Limousine will be among the mentors at the Operator Mentoring Program on the first day of the show. 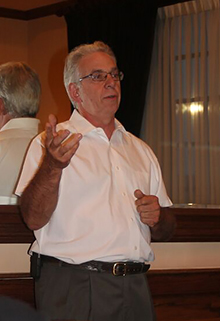 PRLA President Steve Rhoads of Rhoads Limousine On behalf of software company Limo Alliance, PRLA’s newest vendor member, Matt Hayes and Raj Grewal respectively introduced the new venture and offered an overview of its services. Grewal, also of Blackbird Worldwide, explained how the Limo Alliance reservation and dispatch app “lifted the best part of TNCs so passengers have everything they want” and aims to solve the industry’s supply problem in terms of populating its app with a shared inventory among those companies on its platform, which was 26 users at the time of the meeting. Available October 1, the software targets small- to midsize operators, offers back office capabilities, and allows for a customizable interface.

PRLA President Steve Rhoads of Rhoads Limousine reported on how a few members made the trek to Harrisburg at the end of July to speak with the Pennsylvania Public Utility Commission (PUC) legal staff, which was a largely successful endeavor and “a learning experience for both sides.” The PRLA’s representatives stressed the importance of public safety, especially in terms of TNCs’ lack of insurance, and were somewhat frustrated when the PUC didn’t respond quite as they anticipated. With state legislature, the PUC, and PennDOT all vying for jurisdiction, enforcing varying and conflicting regulations is nearly impossible—though members feel like they’re being given the runaround or simply blown off. PRLA’s membership base is encouraged to write letters to the PUC, Department of Labor, Philadelphia Parking Authority, and other related organizations to make sure their voices are heard.

A TNC hearing in Pittsburgh had been scheduled for the next day, for which PRLA members had drafted a letter meant to be read as a testimony; however, Jim Schantz, legislative assistant to Senator Linda Boscala, had to regretfully inform the room of the meeting’s cancellation. He assured everyone that the PRLA’s letter would be read at the next hearing, and that all efforts would be made to hold a similar hearing in the Philadelphia region so local operators would be able to both attend and testify. 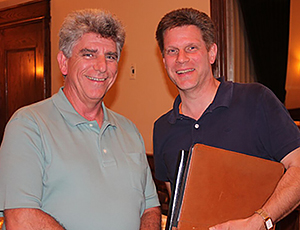 Kevin Klumpp of Rhoads Limousine and PRLA Treasurer Chris Haines of Michael’s Classic Limousine The TNC conversation continued, with operators conveying their displeasure that Uber Black is allowed to operate in Pennsylvania. Some operators noted how the playing field still hasn’t been leveled off (though Uber Black does follow the regulations put to traditional chauffeured ground transportation) and others conceded that “no one’s going out of business over Uber”—but it was emphasized that the industry and taxis alike must keep fighting because “once we’ve stopped fighting, we’ve lost.”

Buses were also a topic of discussion, in terms of apportioned plates, intrastate travel, and possible changes in the lease and exchange of vehicles between operators. Rhoads, an honorary director of the Limousine Association of New Jersey, shared how the neighboring association has written a response to the “absolute nightmare” presented by the proposed liability assumed by those who would borrow large vehicles from other operators.

As two seats are set to expire on the PRLA board—those of Rhoads and Director Perry Camerlengo of Luxury Limousine—the meeting ended with a discussion of association bylaws.

The next PRLA meeting is scheduled for October 7 in Doylestown.