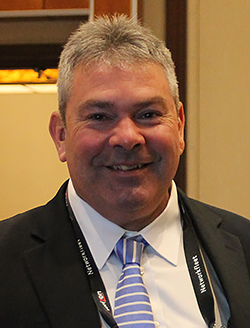 VLA President Paul Walsh of Superior Executive Transportation opened up the morning meeting before guest speaker and Florida Limousine Association President Rick Versace of A1A Airport & Limousine Service addressed the crowd. Versace, who was recently named Limousine Operator of the Year by the Taxicab, Limousine & Paratransit Association, provided an update about the unique TNC landscape Florida operators are facing. He is part of an initiative to bring a statewide app to the Sunshine State’s chauffeured ground transportation industry, and spoke about how it may be time to mimic some of TNCs’ best practices to satisfy customers looking for a luxury on-demand option. 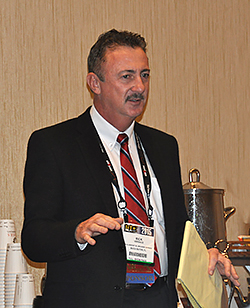 Guest speaker and Florida Limousine Association President Rick Versace of A1A Airport & Limousine Service New VLA members then had a chance to introduce themselves, as did representatives for the meeting’s sponsors, Jack Rolfe and Joseph Lalla from Georgetown Insurance and Steven Wolfson from Century Business Solutions. Wolfson is the association’s newest vendor member and offered to pay a years’ worth of dues for any longstanding or new member who signs up with Century.

Rolfe, who was an underwriter for 25 years before becoming a broker, also spoke at the meeting, where he discussed a number of insurance-related topics. He explained how lay-up coverage can save operators from paying to insure out-of-service cars, buses, or vans, as well how insurance costs are on the rise partially due to the increased cost of repairing modern vehicles.

The dialogue turned to the importance of solidarity, with longtime VLA supporter Arthur Messina of Create-A-Card addressing the long-term value of well-nurtured relationships and Walsh initiating a conversation about why associations are a necessary component of the industry. Members addressed how the VLA has allowed them to, among other things, grow their businesses, tackle legislative issues, share information, find strength in numbers, and network.

To demonstrate those benefits, recent association successes were highlighted. Among them were proposed changes to airport rules, wherein VLA members attended public comment periods to ensure the industry’s needs are met.

Turning its eye toward the future, VLA’s vision for 2016 includes increasing the association’s overall numbers and adding value to association membership. It is actively working to have professional management assistance in place by January 1 to satisfy both of those goals, and will be utilizing technology to offer video conferencing capabilities as well as live streaming.
The VLA’s next event will be its holiday party on December 1.