CLA Party Forges Ahead Despite Snowstorm 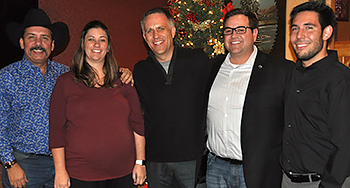 L to R: John Hafer of A Custom Coach Transportation, Mary Norby of Carey Denver, Shane Stickel of Presidential Worldwide Transportation, Adam Paul of Colorado Corporate Car, and Nikko Ouzounis of A White Dove Limousine Denver — More than 30 members and friends braved a snow storm to attend the annual holiday event of the Colorado Limousine Association (CLA). Held at Mickey’s Top Sirloin restaurant, the dinner party gave CLA members the opportunity to socialize and celebrate the accomplishments of the past year.

President Shane Stickel of Presidential Worldwide Transportation welcomed the attendees with a short speech, and expressed his gratitude to the current CLA board members. He also took a moment to recognize Franci Ouzounis of A White Dove Limo for her role in obtaining the venue for the holiday event. Before giving the floor to Phillip Jagiela, CLA Executive Director and Chauffeur Driven Industry & Brand Ambassador, Stickel closed by announcing that elections for the 2016 board members will be held at the next general membership meeting. 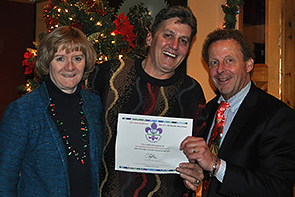 CD Industry & Brand Ambassador Philip Jagiela (right) with Doug Pooley of Colorado Limousine After Jagiela greeted the crowd, he shared some of CLA’s 2015 successes and provided highlights regarding the association’s social media activity and new website. Unfortunately, Jagiela was met by disappointed groans when he announced that, this year, there would be no “standard raffle” of the highly sought-after passes to upcoming Chauffeur Driven events; however, this was a bit of misdirection, as two passes were given to winners of a trivia contest. Douglas Pooley of Colorado Limousine in Denver took home a pass to the Chauffeur Driven Executive Retreat in New Orleans, and Mary Friesema of Red Boots Limousine in Denver won the pass to the Washington, D.C. show.

Next, Barb Curtis of Two Step Limousine took the floor to announce her candidacy for NLA’s At Large seat. She shared her experience, which includes six years as an NLA director and five years as the association’s secretary. After Curtis spoke, Stickel made a few closing comments to close out the evening event.

CLA’s next general membership meeting will be January 19.