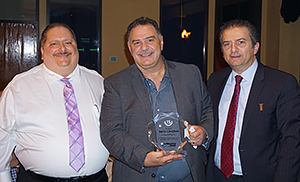 Ira Goldstein, Executive Director of the New York Black Car Fund (left) and Berj Haroutunian, Fund President (right), present a special award to James Conigliaro in appreciation of his many years of dedication and service to The Fund. New York — The Black Car Fund (NYBCF) recently held their monthly meeting on December 21, which was followed by a holiday dinner party. Thirty people were in attendance to celebrate, including members of the NYBCF board, former board members, industry leaders, and vendors.

Following on the heels of the group’s successful charity work with the New York Cares Coat Drive and Food Drive for City Harvest, the dinner gave attendees the opportunity to celebrate the past year and relax with industry peers. The meeting presented the perfect opportunity to give thanks to board member, James Conigliaro, General Vice President of the International Association of Machinists and Aerospace Workers, for his years of dedication and service to the Fund. His son, James Conigliaro Jr., is taking his position on the board, after being appointed by Governor Andrew Cuomo, at the recommendation of Speaker of the NYS Assembly Carl Hastie.