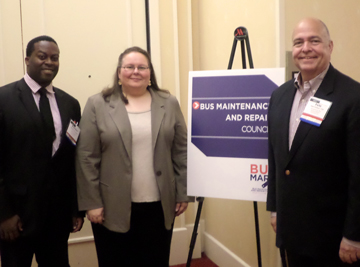 BISC, which is comprised of security, mechanical, safety, operational, and maintenance leaders from across the North American motorcoach industry, was the first of the meetings held June 28-29. Over 100 operators met for sessions that focused on the most pressing bus issues, including the adoption of electronic logging devices (ELDs), legislative and OSHA updates, and driver training. As a highly regulated and politically focused industry, fire safety training and policies topped the docket.

The newer council of the two, BusMARC, was created in 2015 specifically to address the needs of maintenance education and compliance training among motorcoach operators. As one of its first meetings, held June 29-30, about 50 operators from all over the country joined the two-day event. Like its counterpart, BusMARC’s education was dominated by current regulations, compliance, safety, and training, but also included roundtable discussions with major bus and parts manufacturers, as well as site visits to area operator Dillion’s Bus Service.

We will have more information and pictures from the two meetings in the August issue of Chauffeur Driven.

Visit buses.org for more information on the American Bus Association, its councils, and educational opportunities. Its annual conference, Marketplace, is scheduled for January 14-17, 2017, in Cleveland, Ohio.