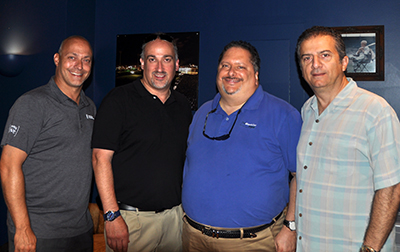 L to R: David Bastian of Towne Livery, Kevin Barwell of Giorgio’s Limousine, Ira Goldstein of the Black Car Fund/BCAC, and Berj Haroutunian of Vital Transportation Buffalo, N.Y. — Members of the Limousine, Bus, Taxi Operators of Upstate New York (LBTOUNY) met for their summer meeting Saturday, August 13. The annual sojourn took place at Coca-Cola Field, home of the Buffalo Bisons, where nearly 40 members, their families, and friends of the association gathered in the Towne Livery-sponsored suite for what President Kevin Barwell of Giorgio’s Limousine referred to as an “abbreviated meeting” before the start of the baseball game. Heavy rains canceled the game, but the group still enjoyed some stadium treats and some good company. Managing Editor Susan Rose also attended.

After some quick association updates, TNCs and a legislative update were at the top of the docket. Barwell says that they may not have had the success they wanted in this last legislative session, which ended this summer, but they are ramping up to continue the fight when the next session begins again in January.

“Our representatives seem like they are being pressured. They are seeing the facts, but when you have a lot of people—the general public—who don’t realize the safety concerns with TNCs, then it’s a problem,” says Barwell. “I remember hearing a woman say that she could get everywhere now because of TNCs, and I just shook my head. She could get everywhere before. What is ‘now’ is that taxi operators are going to be Uber drivers.”

Barwell says that the association does have the support of some of the members of the Assembly like Assemblyman Kevin Cahill, whom he said was on record calling Uber “bullies.” 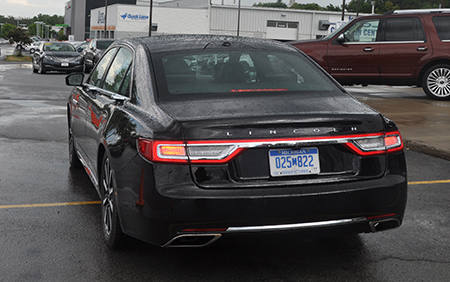 David Bastian captures a video of a Lincoln Continental test drive “At the end of this last session, Assemblyman Cahill remarked that Uber comes into an area, tries to bully their way, and then turns it around so that they are the victims. He said: ‘We’re not going to cower and be take advantage of,’ so we have some allies in Albany.”

LBTOUNY is using the coming months to reaffirm its support with other state associations and the taxi industry. “We’re looking at our options right now in between the sessions and there are a lot of things that we’re probably going to go after, especially insurance and criminal background checks—those are very important things that we need to address,” he says.

Barwell also noted some local victories, including the quashing of a permit required for groups who rent and intend to host parties aboard buses. Noting the last-minute nature of the industry and the limitation of government office hours, Barwell was more red tape that safety-related. He also said that the association members are working with local wineries on policies and protocol that benefit both operators and the wineries in an effort to curb lewd behavior by inebriated passengers imbibing at several stops along the wine trail.

CD’s Susan Rose also raffled a ticket to the 2016 Chauffeur Driven Show in Washington, D.C., this October 9-12, which was won by none other than Barwell. 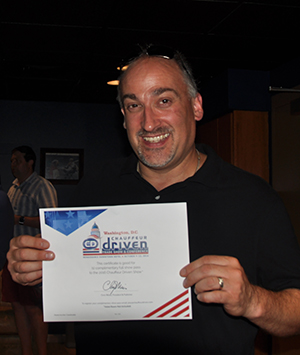 LBTOUNY President Kevin Barwell won the pass to the CD Show in D.C. this October The meeting was held on the heels of Towne Livery’s Continental ride n’ drive event. The two-day event began Friday night at Shea’s Performing Arts Center, a classic theater in downtown Buffalo. Hosted and organized by David Bastian of Towne Livery, nearly 200 livery and retail customers were on hand for the unveiling of the brand-new black Lincoln Continental—the first chance for anyone to see it up close and personal. Bastian, who live posted many videos during the catered event, says that he was thrilled with the turnout.

The following morning, many operators and retail customers not only had the opportunity to sit in the Continental and check out its many features, but to take it for an actual test drive. The sign-ups, which began the previous evening at the reveal, were completely full despite the rain that moved in during the afternoon. Starting at the Towne Lincoln dealership in Orchard Park, participants enjoyed 15-minute guided test drives highlighting all of the amenities of Lincoln’s new flagship. The enthusiastic reactions were captured by GoPro cameras that were mounted in several spots within the vehicle. You can see more photos and videos from the event at facebook.com/david.b.livery. Also check out more photos on the Chauffeur Driven Facebook page (goo.gl/PwCkCf) and in the next issue of the magazine.

The Continental is expected to hit dealerships in early fall and has already attracted the attention of a few large operators, chief among them Dav El/BostonCoach CEO Scott Solombrino, who announced last month that he would be adding the iconic nameplate to his fleet.