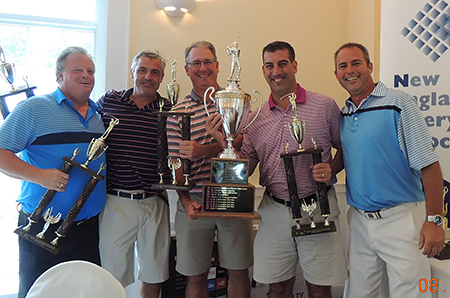 NELA President Mike Callahan of Able Limousine (right) with the Solomon McCown & Company team, who placed first in the golf tournament Marlborough, Mass. — When the 17th Annual George Colarullo Memorial Golf Tournament took to the Marlborough Country Club August 16, the New England Livery Association (NELA) once again celebrated the memory of one of its founding members with a charitable golf outing, auctions and a raffle, and celebratory fundraiser dinner.

Chauffeur Driven was among dozens of sponsors supporting the event, sponsoring both the breakfast and the Closest to the Pin Award, and donating several auction items. A pass to CD's 2016 Show in Washington, D.C., was won by Dave Skroki of Mercedes-Benz of Shrewsbury for winning Closest to the Pin, though he donated it back as an auction item, which was ultimately won by Lisa Censullo of BostonCoach.

According to NELA Executive Director Rick Szilagyi of Lexian Management, this year was especially noteworthy for boasting a turnout that rivals the event’s pre-recession numbers, with roughly 100 participants—some of whom traveled from as far away as California and Florida—making this one of the best-attended golf outings in recent memory.

“With everyone who comes out for just the dinner and all of our volunteers, there were probably 120 people at the dinner,” he said. “We were really happy to see some of the best numbers in years.” 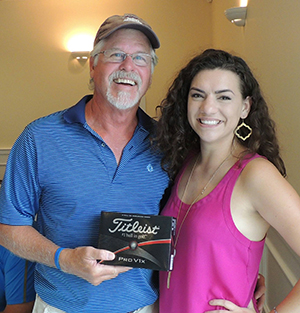 Dawson Rutter of Commonwealth Worldwide Chauffeured Services with Kate Rokos, spokesperson for the Cystic Fibrosis Foundation In addition to the association’s annual support of Chip’s House, a long-term housing community where one of Colorarullo’s sons has been residing since a motorcycle accident left him with a brain injury, proceeds from NELA’s biggest fundraiser of the year also benefited the Cystic Fibrosis Foundation, whose spokesperson Kate Rokos was on hand to show the foundation’s appreciation for the donation and support. A small portion of the day’s funds also went back into NELA’s coffers to support its many initiatives and operational costs.

NELA will return to the country club August 15, 2017, for its 18th annual golf tournament. Its next membership meeting will be September 13.