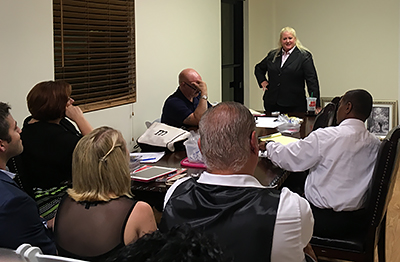 CFLA President Wendy Kleefisch of Brevard Executive Limousine and Vice President Gregg Moulton of Orlando Select Transportation opened the meeting by welcoming the group, and by sharing the regrets of members who were unable to attend due to the weather.

After the minutes from the previous meeting were approved, Kleefisch introduced the meeting’s first guest, Tom Draper, Director of Airport Ops with the Greater Orlando Aviation Authority (GOAA). Draper’s lengthy and information-packed presentation provided an extensive overview of happenings at the Orlando International Airport (MCO). 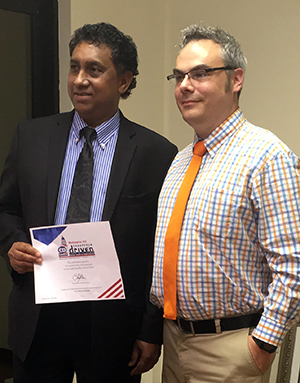 Show pass winner Brian T.Q. Bacchus of Luxury Rides in Orlando (left) with CD Editor Rob Smentek Draper shared that he and GOAA are largely on the side of the chauffeured ground transportation industry when it comes to TNCs, and they are continuing to work to even the playing field. GOAA has strict regulations for vehicles picking up passengers, and they are actively ticketing UberX drivers. Several CFLA members expressed their concerns with what they believe are inconsistency with enforcement at the airport’s ground transportation lot, but Draper pledged that he’d be willing to assist with any issues personally and provided the group with his direct contact information. He also shared GOAA’s plans for a new garage currently in construction at MCO that will hopefully alleviate many of the parking concerns.

Next, Kleefisch introduced the next speaker, Andrea M. Brasoveanu, president of American Corporate Security Investigations. Brasoveanu emphasized the importance of a comprehensive background check for chauffeurs, and provided an overview of her firm’s services. She also made the group aware about the trend of workplace violence, which is currently on the rise. Before concluding, she offered CFLA members free consultations to assist with any security or fraud issues currently faced by the operators.

After a few quick words from vendor guests Brent Phillips of Matthews Buses and Matt Clements of Professional Insurance Center, Kleefisch introduced Smentek. He thanked the group for the warm welcome—which included homemade cookies in the shape of Chauffeur Driven’s logo, courtesy of Maria Palie of GNS Transportation group—and then spoke about the upcoming CD show in Washington D.C. With much of the group familiar with the annual show, Smentek concentrated on new events like the Benchmark Breakout sessions, the revamped Women in the Industry seminar, and the new show floor hours. To close the meeting, Smentek raffled a free show pass, which was won by Brian T.Q. Bacchus of Luxury Rides Orlando.

The next CFLA meeting is scheduled for October 18th.