PRLA Takes Part in Day on the Hill

Harrisburg, Pa. — Fourteen members of the Philadelphia Regional Limousine Association (PRLA) took part in a Day on the Hill on October 17. Their goal was to provide education to lawmakers and their staff on the regulatory challenges that the chauffeur ground transportation industry currently faces in the state. The event was a timely one, with action on the long-standing Senate Bill 984 (“The Ride Share Bill”) gaining momentum in the capital.

Among those who attended were PRLA President Steve Rhodes of Rhoads Limousine and Board Member Anthony Onorata of Anthony Limousine.

PRLA Legislative Committee member Michael Barreto, Philadelphia branch manager of Flyte Tyme Worldwide, stated that the association is looking to get more proactive in its interactions with government agencies, and has even gone as far as hiring legal counsel to aid in its fight with the Philadelphia Parking Authority (PPA).

“We planned the Day on the Hill in order to try get education out to the House side of the Hill and their consumer affairs committee regarding The Ride Share Bill that has been sitting for close to a year,” said Barreto. “We tactfully set up appointments with members on the committee and had conversations with them. The overall position we created raised a buzz.” 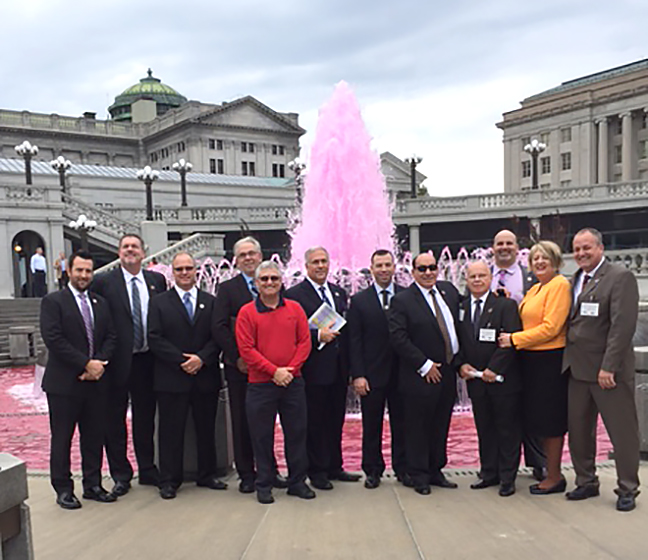 The PRLA legislative committee participates on a Day in the Hill in Harrisburg, Pa. Barreto said the information they provided was eye-opening to a lot of the representatives and their staff, especially among those who have used TNCs in the past and were unaware of the “digital hitchhiking” aspect of the services. The PRLA members met with roughly 20 people in Harrisburg and followed up the following day by sending links to the Taxicab, Limousine & Paratransit Association’s Who’s Driving You campaign to roughly 275 legislators and staff.

“Any initiative we were able to accomplish is beneficial to the industry. We’ve gone to the Hill before, but this time we had a clear concise message,” added Barreto.

Regrettably, the Ride Share Bill was passed by the House on October 19, giving TNCs the green-light to operate permanently in the state of Pennsylvania. However, this is not viewed as a total loss to the chauffeured ground transportation industry, as Barreto pointed out that there were “amendments added in that made regulatory oversight of livery a little less burdensome.” Also, the state is reportedly restructuring the tariff requirements to not be so concrete so operators can promote more dynamic flexible pricing.

In light of this recent turn of events, PRLA will now look to focus its efforts on the battle with the PPA, specifically to combat the recent 110-percent increase in the per-vehicle rate for vehicle registration.

The next PRLA meeting is scheduled for November 15 in Atlantic City.