Carlos ValdesMiami, Fla.—Worldwide Transportation recently announced its expansion into the destination management industry with the establishment of its new DMC, Worldwide Destination Management. General Manager Carlos Valdes will lead the new company. South Florida is a top ten destination for events and conferences.

Valdes has served the destination management and event planning needs of corporations and associations visiting the Florida area since 1984. In 2008, Valdes was awarded the Destination Management Certified Professional (DMCP) designation, developed by the Association of Destination Management Executives International (ADMEI), for demonstrating a knowledge level and commitment to excellence in the field. Valdes brings experience and a successful track record in elevating a premier South Florida DMC to Special Events Magazine’s top 25 Destination Management Companies worldwide. Valdes continues to develop his expertise in overall management and client relations with a focus on complete customer satisfaction and program success.

“I am excited about this new venture with Worldwide Transportation; combining forces will allow us the opportunity to redefine the Destination Management Industry…and now I get to do what I do best: manage my client’s expectations,” says Valdes.

GCLA Gets Down to Business in the State’s Capital 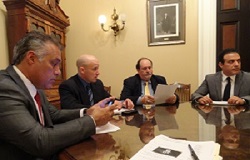 L to R: Kevin Illingworth of Classique Worldwide Transportation, Chris Quinn of Corporate Transportation Solutions, Rich Azzolino of Gateway Global, and Alex Darbahani of KLS Worldwide listen intently during a meetingSacramento, Calif.—Greater California Livery Association’s recent San Francisco meeting was a general meeting to update area members on GCLA initiatives. GCLA’s board and a dozen or more operators discussed the same issues at their Day on the Hill in Sacramento this past February 26. GCLA lobbyist Greg Cook of Government Affairs Consulting was in fine form with six meetings scheduled throughout the day. The association met with assembly members, senators, staffers, and policy makers to confer about key issues.

State Bill (SB) 611 is Senator Jerry Hill’s (D, 13th district) newly reintroduced 2014 bill to replace SB 338 that was vetoed last year by Gov. Jerry Brown due to California Highway Patrol’s (CHP) pricing on inspections. GCLA’s goal is to cap the CHP inspection costs after CHP analyzes the best and most efficient way to inspect vehicles. That may mean having centralized locations which could be a hardship for some operators in more remote areas. Sen. Hill is interested in the chauffeured ground transportation industry and very supportive overall, seeking GCLA’s advice regularly. GCLA opposes the bill as it is currently written, but its board is confident that a reasonable way can be found to push it into its final stages.

State Bill (SB) 109 was next on the agenda. This is the (in)famous bill that was drafted after the horrific limousine fire in August 2013 that killed five women. SB109 became law in January 2014 but there is no known impact, as of yet, on the industry. By requiring five points of egress on stretched vehicles the speculation is that some operators may simply go out of business and will have to sell their vehicles out of state. No vehicle manufacturer, or retrofitter, has yet engineered a way to build this vehicle. If the requirement or design includes a roof exit, GCLA believes safety issues will be compounded by irresponsible passengers who, because they must be able to open the exit themselves, will act recklessly; much worse than the issue caused by a sun/moon roof. In addition, the wiring that runs in the roof could be a problem and possible source of more fires. While SB 109 is already law, GCLA’s goal was to open the ears of other house members to consider a shell, extension, or other modification(s) at an appropriate time. At the very least, a plan to “grandfather” in current vehicles would be most helpful to smaller operators throughout the state.

The topic switched then to efforts to streamline the various processes the chauffeured ground transportation industry must endure in the state of California. In California, all vehicles are permitted, inspected, and reviewed by the California Public Utilities Commission (CPUC), DMV, DOT, CHP, and multiple airports; each organization having its own set of criteria. GCLA is working to streamline this to efficiently provide permitting and livery plate access while coordinating with solid enforcement. Several house members suggested that GCLA write up its own bill for them to present. This idea was taken under advisement.

Of course, TNCs (transportation network companies) were also a hot topic of debate and conjecture, as Uber and the other apps tend to be. TNCs are not currently able to operate at California airports, but it has been difficult for the airports to recognize the vehicles because there is no permitting and TCP process for the “rogue” vehicles. GCLA’s goal, as it is for many of the other associations, is to level the playing field, having TNC operations being held to the same safety standards and regulations that they currently have now. From insurance limits to random testing, GCLA views this as a safety issue that could reflect poorly on legitimate livery/charter companies.

At the end of day, the consensus among GCLA members was that having operators speak directly with those on the Hill helped their lobbyists be more effective. Therefore, plans are already in motion to attend this again next year.

Rockville, Md.—Taxicab, Limousine & Paratransit Association (TLPA) has launched a campaign to counteract the misinformation spread by Uber, Lyft, and Sidecar, and to help passengers with concerns about these unregulated transportation companies.

“Who’s Driving You?” is one part information portal for those seeking facts about the rise of the so-called “ridesharing” industry, and one part help desk for passengers concerned about the ugly side of Uber and its service UberX, as well as Lyft and Sidecar.

“Whatever these companies, their CEOs, or their Wall Street or Hollywood investors say in public tends to be taken as the gospel truth, and that’s just not the case,” says Robbie Werth, president of TLPA. “They say they are simply technology companies—yet they are taxi companies. They say they are insured—yet refuse to take responsibility for accidents. They say their drivers are properly screened—yet time and again we see convicted felons behind the wheel. We’ve had enough.”

The public can file an incident report based on their concerns over interactions with Uber, Lyft, or Sidecar in the cities in which these unregulated transportation companies operate. The report can be filed at whosdrivingyou.org. Website staff will immediately inform on how to file a complaint with local officials. The public is also encouraged to connect with the campaign on Facebook (WhosDrivingYou) and on Twitter (@WhosDrivingYou).

The campaign coincides with a new poll released last week that shows that Florida residents overwhelmingly want Uber to be regulated at the local level just like traditional taxi companies (78 percent). The research comes just as Florida lawmakers are being approached by Uber—possibly, some news reports say, to push for legislation that would effectively permit the company to operate statewide wherever it chooses, rather than be subject to city-by-city “home rule” regulations that govern the taxi industry.

The poll, commissioned by Orlando-based Mears Transportation Group, showed that among Floridians:

• 78 percent believe Uber should be subject to the same local city regulations as taxis.

The poll also points to troubling questions in terms of discriminatory service, quoting sociologist Dr. James Wright of the University of Central Florida as saying that “UBER-ineligible Floridians” are disproportionately Hispanic (59 percent), African American (55 percent), low income (70 percent), and elderly (64 percent). This is partially due to the fact that smartphone and credit card accessibility is lower among these populations, both of which are required to use the service. Uber also does not have a service for disabled riders, who could benefit greatly from the service.

The TLPA has been a vocal critic of Uber, its unlicensed amateur driver service, UberX, and of other unregulated transportation companies such as Lyft and Sidecar. The association has repeatedly warned that drivers for these services do not carry proper commercial auto liability insurance that is necessary in the for-hire industry; that drivers are not properly screened and fingerprinted in police-conducted background checks; and that residents in low-income neighborhoods and people with disabilities cannot avail themselves of the services.