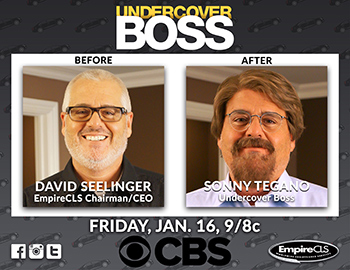 Secaucus, N.J.—The chauffeured transportation industry will be front and center on this Friday’s episode CBS’ Undercover Boss. EmpireCLS Chairman and CEO David Seelinger gets a complete makeover and a new name as he explores what it’s like to work in his own company. The show will air on January 16 at 8:00 pm ET/PT.

"Going undercover was a unique experience to get an unobstructed view of our company and see how we can improve," says Seelinger. "EmpireCLS has grown in leaps and bounds, and it was important to me to connect with our employees and learn how the growth we've experienced has impacted them, our brand, and our clients."

An entrepreneur with a passion for hospitality and a love for motorcycles, Seelinger has been responsible for the direction and growth of EmpireCLS, formerly Empire International, since 1990. He developed the company's global affiliate network, proprietary reservation system, and, in 2005, merged with one of its largest competitors, CLS Transportation, creating the largest transaction of its kind in the ground transportation industry.

Seelinger stresses that the opportunity to go undercover as a chauffeur, dispatch specialist, fleet inspection manager, and affiliate chauffeur has been "invaluable," learning new ways to improve and expand the EmpireCLS brand. After sharing his finding with EmpireCLS leaders, the company is implementing several initiatives to simplify company processes, stay connected with its employees, and ensure their needs are addressed.

"Admittedly, I've been out of touch with some aspects of our business," says Seelinger, "but EmpireCLS wouldn't be the company it is today without its hardworking employees—making sure their needs are fulfilled is a priority and important lesson I took away from this experience."

Linda Jean (Liles) Assolin, wife and mother to Nick and Matt Assolin, respectively, of Nikko’s Worldwide Transportation, passed away December 29, 2014, at MD Anderson Cancer Center due to complications following surgery. She was 63.

Linda joined her husband in co-founding then-Nikko’s Luxury Limousines after founding Pinemont Office Supplies in 1982, which she managed until 1989. She started her career as a legal secretary for a prominent Houston law firm, where she worked until 1975. She then obtained employment with Southern Host, a national hotel/motel management corporation, and worked her way up to being named general manager in 1979—becoming the first female general manager in the Southern Host System. In 1981, the company transferred her to Tampa, Fla., to be general manager of its new Holiday Inn franchise.

A two-time cancer survivor, Linda is survived by her husband Nick; son Matthew Allen, his wife Xochitl, and their child Matthew William; her parents, V.E. "Huey" and Ann Liles; her sister, Patti Brown; and her nephew Christopher, his wife Kathy, and their three boys, Remington, Aidan, and Cole.

The memorial service was held January 10 in the Jasek Chapel of Geo. H. Lewis & Sons in Houston.

Destination MCO Among Winners of Florida Companies to Watch 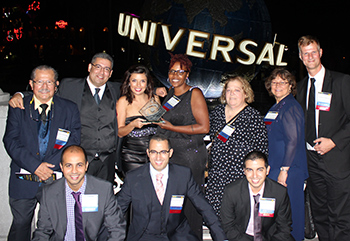 The awards, held for their fourth year in 2014, recognize privately held second-stage companies (businesses that have grown past the startup stage) that demonstrate “the intent and capacity to grow based on employee or sales growth, exceptional entrepreneurial leadership, sustainable competitive advantage, outstanding corporate culture, [and] inspired community giving,” according to the GrowFL website. More than 500 statewide nominations were winnowed down to 50 winners for the 2014 awards.

“The main goal of the awards is to help second-stage companies take it to the next level,” said Sami Elotmani, Destination MCO’s VP of Operations. “It’s a very prestigious award for small companies that are growing rapidly, and it shows the amount of energy and resources we have spent in making sure that we’re doing the right thing.”

Destination MCO has been nominated for the award once before. A nomination is the first of a two-step process: Once a company has been recognized, it must provide additional information and records to make sure the operation is in accordance with award criteria.

This year’s nomination came from the Small Business Development Center (SBDC), which Destination MCO had been working with. Elotmani says that the win is both an honor and a testament to the quality of the company’s team. 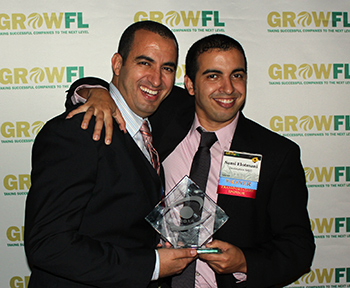 Destination MCO’s President and CEO (left) Nour Elotmani and VP of Operations Sami Elotmani “Obviously, this is something we could not have achieved without our team,” he said. “It’s something that we took very seriously, and we dedicated the award to our team because, without them, we wouldn’t have achieved this.”

Many Destination MCO employees attended the awards gala, which was held at Orlando’s Hard Rock Live, as did the other winning companies’ teams, VIPs, and members from both GrowFL and SBDC.

“Some of the counselors from the GlowFL community who worked with us and a consultant who worked with us at SBDC were there to see us receive the award,” Elotmani said. “When we attended the gala, we brought along some employees who represented all of our departments—chauffeurs, office staff, dispatchers, and managers—because we won the award together.”