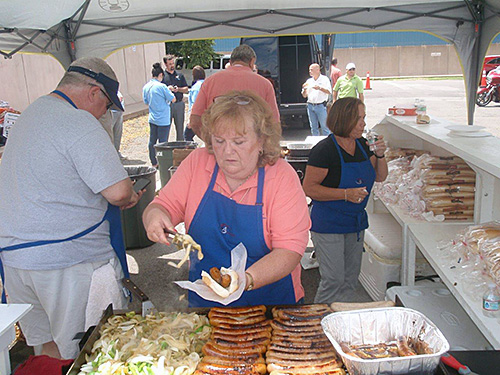 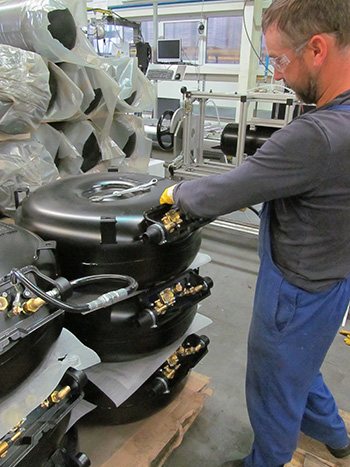 Worthington's Propane Autogas Fuel Tank Columbus, Ohio —A propane autogas fuel tank that won’t waste you’re vehicle’s cargo space is now approved by the American Society of Mechanical Engineers (ASME), and will soon be available in the United States. Developed by Worthington Industries, the new doughnut-shaped, or “toroidal,” propane autogas fuel tank fits in the spare-tire space of a car or pickup truck, and will be available to order in mid-August.

The tanks, manufactured at Worthington’s premier facility in Poland for nearly 20 years, have been popular throughout Europe, South America, and Asia. Worthington saw the need for the convenient tire-sized tanks in North America as an alternative to their line of cylindrical tanks, and met the stringent ASME propane autogas fuel tank regulations to earn approval. ASME provides engineering and manufacturing regulations that hold products to quality and safety standards that exceed the European requirements.

“We successfully met ASME’s rigorous materials, production, testing, and design requirements for the North American market,” says Wayne Powers, general manager of Alternative Fuels for Worthington Industries. “Earning this certification and having the ability to deliver this high-quality product will benefit fleet owners interested in fuel conversion and provide them a design that maximizes cargo space by only utilizing the spare-tire space of a vehicle.”

Varying in size and shape to fit a variety of vehicles, eight models of the fuel tanks are ASME-certified. The diversity of the tanks will provide an opportunity for most vehicles to convert to propane autogas, a clean-burning, domestically produced fuel that offers fleet managers an economical alternative to gasoline and other fuels.

Powers says that the fuel tanks are ideal for a variety of vehicles with large-capacity cargo needs, such as taxi fleets.

“The tank’s unique design is perfect for taxi fleets, and many others, which will now have the opportunity to switch to propane autogas when they previously couldn’t sacrifice the trunk space or cargo room,” Powers says.

The new fuel tanks will be in full production this fall, available for purchase in full container to minimum quantity orders.

“This is a very exciting opportunity for Wolfington, as Turtle Top reflects our same principles of premium quality products and top-of-the-line service and support,” says Brian Engle, Wolfington’s Vice President and Commercial Sales Manager. “With a full product offering in New Jersey and the International Odyssey line in Pennsylvania and New York, we look forward to the new opportunities ahead of us as we continue to expand our livery sales.”

Wolfington is the IC Bus distributor for school buses in Pennsylvania, Delaware, and New Jersey, and one of the largest school bus dealers in the country. Started as a carriage builder in 1876, Wolfington Body Company kept up with the many changes in the transportation industry, ultimately moving from building bus bodies to becoming a full-service bus dealership.