The PH4 captures the interior of the passenger compartment and views form the driver’s perspective toward the front of the vehicle. The external camera are designed to mount on the side panels of the vehicle to capture video along the side. Other recommended positions include a backup camera with the option to plug in an external monitor, and within the passenger compartment for longer vehicles.

Management can now track their vehicle routes, stops and starts, driver and passenger behavior, and speed while viewing the actual video events as they occurred in high-definition video. Variable bit rate recording and colored night vision also enhance the quality of the video captures.

Visit planethalo.com for more information on the camera options available.

Winston-Salem, N.C. — Black Tie Transportation has purchased the assets of Raleigh-based Blue Diamond Worldwide Transportation, a chauffeured limousine and sedan service founded by Carrie Peele. The sale was facilitated by The Tenney Group, a 40-year-old firm specializing in sales, acquisitions, and valuations of transportation businesses across the U.S.

Gray Hill, owner of 25-year-old Black Tie Transportation, had been looking to expand bus business and approached The Tenney Group about available opportunities. “Communication between all the parties involved was critical for me in this purchase,” he says. “The Tenney Group worked hard and met my expectation. I think it is a great company and would recommend it to anyone who is looking to buy or sell a transportation company.”

Blue Diamond Worldwide was founded in 1990 with $15,000 and one midnight blue limousine. Over the last 24 years, Peele turned that small beginning into the largest woman-owned limousine company in North and South Carolina.  Because of her outstanding dedication and perseverance, she was able to solidify contracts with large corporations, international clientele, and state agencies throughout the county. The purchase provided Gray with a fleet consisting of 12 small to midsize luxury vehicles.

“Carrie is a well-recognized business leader in the Raleigh-Durham area and throughout the chauffeured transportation industry,” says Charles Tenney, managing partner of The Tenney Group. “It has been a privilege to help her. Early on, Gray saw the potential synergies; he is a natural fit for Blue Diamond Worldwide, and this is a great deal for everyone involved.”

Visit www.blacktietransportation.net for more information about the merger.

Industry Unity Is the Prevailing Message of FLA Meeting 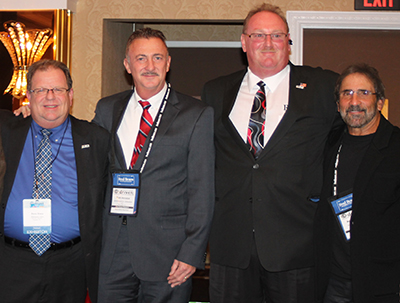 The meeting kicked off with a few words from the newly installed Taxicab, Limousine & Paratransit Association (TLPA) President Mike Fogarty of Tristar Worldwide. He described the ongoing war against TNCs as “the battle of our lives,” promising that “we’re going to win some battles, we’re going to lose some battles, but we’re going to fight,” and encouraging all in attendance to take comfort in the increasingly negative media coverage about unregulated transportation services.

Barry Lefkowitz, industry lobbyist and former executive director of the Limousine Association of New Jersey (LANJ), continued the call for a unified front. “We’re competitors but everyone has to come together,” he said. “The battle isn’t just about limousines, the battle is not just about taxicabs. It’s a battle that affects everybody in commercial ground transportation.” He emphasized that the fight against TNCs is a fight for increased public safety.

Lefkowitz also addressed the seemingly bottomless pockets that TNCs have on their side, saying that the legally operating companies have something in their favor that money can’t buy. “They have all the money in the world but one thing that they don’t have is the grassroots support that we can create when everybody is working together,” he said. “There are phenomenal resources available to you. You’ve got all the resources that you need to be able to take the TNCs on.” 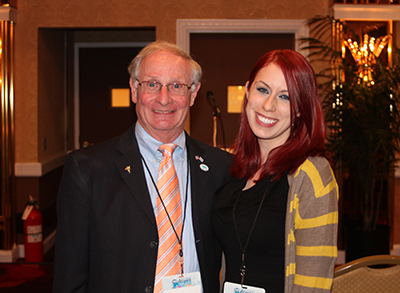 Lobbyist Barry Lefkowitz, who spoke at the FLA meeting, with Chauffeur Driven Editor Madeleine MaccarFLA President Rick Versace of A1A Airport & Limousine Service reported on how the statewide and regional Florida organizations have been seeking out every possible avenue to slow down the rising tide of illegal operators while the associations combine forces as well as financial resources. One of the fruits of these labors is a public-service commercial that the organizations will be airing on local public access stations to educate the public about the dangers of TNCs, which Versace encouraged other associations to use, too.

SFLA President Neil Goodman of Aventura Worldwide Transportation Service described his organization’s fight against TNCs, and how his association is considering rehiring a lobbyist to assist in its battle at Tallahassee. “What I’ve heard lately, as recently as a week ago, is that they’re thinking about legislating the insurance and the background checks, and leaving everything else to the local counties and the local cities,” Goodman reported.

Cliff Wright of Royal Transportation Group and GOLA president spoke about his association’s recent electronic billboard campaign to inform the public about the dangers of TNCs, as well as GOLA’s unanimous decision to join forces with the FLA and its ongoing fight at the state capital.

WFLA president Dave Shaw of Olympus Limo & Sedan Service discussed how his county of Hillsborough is unique in its operations, as it’s governed by the only Special Act in Florida’s 67 counties. “Every role change in our county has to go through Tallahassee, so if anyone’s going to be attacked first, it’s Hillsborough County, and that’s what they did last year,” Shaw said. He explained how the county’s new director of the Public Transportation Commission (PTC) is a “by-the-book guy” who enforces for-hire transportation rules and regulations to the letter, much to the benefit of legally operating livery companies. He said that the WFLA is continuing to work in tandem with the PTC to keep an eye on TNC activity and establishing requirements for insurance, drivers, and vehicles.