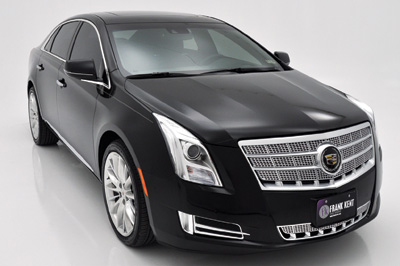 Cadillac XTS 2013 Luxury Sedan As we bid adieu to the industry’s quintessential black sedan, we ­welcome in a new generation of elegant vehicles that are ready to capture the changing demographics of the chauffeured professional. The 2013 Cadillac XTS, which debuted in the second half of 2012, certainly proved itself a worthy contender for the wide-open sedan market.

One glance at Cadillac’s new flagship and you know it’s not your father’s livery sedan—and thank goodness for that. With a refined exterior, the outer shell appeals to a younger generation of professionals who want their vehicles to look muscular and responsive without the added fuel consumption. Its angled rear and long, lean headlines feel like a throwback to the days when owning a Cadillac was part in the American Dream, long before the market was flooded with European and Japanese imports. 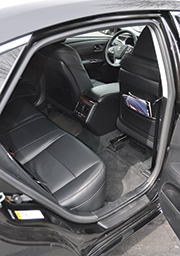 2013 Toyota Avalon Hybrid Let’s not beat around the bush: The Toyota Avalon doesn’t pretend to be something it’s not, and with a lot of competition out there, that’s a good thing. And let’s get another thing straight: There is a place in our industry for a dependable, comfortable vehicle that has a very attractive price. It’s not likely to replace your entire aging fleet of Town Cars, but there’s no reason it can’t complement your current lineup for customers who may need a lower price point, or help you win an RFP that requires greener vehicle options.

Toyota has produced a great overall vehicle that dismantles any preconceived notions you may have about previous Avalon models. As one would expect from the maker of one of the all-time best-selling green cars, Toyota offers the Avalon in a hybrid model. The Avalon Hybrid Premium boasts a combined 40 mpg—more than double what your older Lincolns may be getting (the vehicle CD tested met and exceeded this estimate, although conditions will vary). The gas-powered Avalon is still not bad at a combined 25 mpg, with an expected 31 on highways. 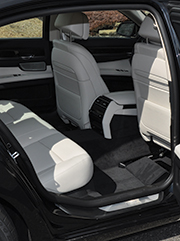 2013 BMW 750Li Interior It's pretty tough to find fault with a vehicle that has everything: ruggedly handsome looks, an athletic build, a long and lean body ... Simply put, it’s one of the nicest luxury sedans available that can also work well in our industry—if you’re willing to spend the money.

Setting aside price for the moment, if you’re going to go for any of the 7 Series, be sure to check out the 750Li, because the additional room you get will be worth it for your passenger’s comfort (you gain about 6 inches of leg room with the 750Li versus the 750). The 750Li has standard rear-wheel drive, but also has available 4-wheel drive with xDrive. 2013 Global Operator of the Year Karim Maachi, CEO of Paris-based Cardel Global, has expanded into neighboring Switzerland with the acquisition of Geneva-based Elegance Limousines, which will be rebranded to Cardel Global Switzerland. Originally Posted - February 27, 2013

PARIS — Geneva sits on the border of Switzerland and France. It’s about 254 miles from Paris and is one of the major financial centers in the world, ranking third in Europe — behind London and Zurich — by the Global Financial Centres Index, and ninth in the world. Put simply, it’s a market ripe for premium chauffeured services specializing in corporate travel.

Paris-based Cardel Global, the 2013 LCT Global Operator of the Year, has built a reputation for its expertise in executive transportation, especially corporate roadshows. CEO Karim Maachi told LCT that Cardel Global’s business volume in Switzerland has risen during the last four years. To strengthen his brand’s foothold in the Swiss market, Maachi acquired Geneva-based Elegance Limousines on Feb. 15. Elegance will be rebranded as Cardel Global Switzerland.

“This merger is an opportunity for us to open local contracts with our French and European clients who have branches in Switzerland,” Maachi said. “We have already signed a huge contract with a private jet company based in Switzerland. Elegance Limousines had the local contract, and we were able to get their global contract based on the reputation of Cardel Global. There is a real synergy between Paris and Geneva, as well as between Cardel Global and Elegance Limousines.”

Limousine service in the French and Swiss markets is still considered a luxury service and the two markets are similar with respect to customer profiles, Maachi said.

However, the Swiss market has stricter regulations, a strong transportation union, and a minimum rate so that operators cannot drop their rates. Maachi sees that as a double-edged sword because on one hand it closes the door to companies who want to compete through cheap prices, but on the other hand it makes competition based solely on the quality of service, which Maachi likes.

“We will grow very quickly,” Maachi says. “The acquisition included six vehicles and one dispatcher, but we will be making an important investment in the next weeks and months in terms of cars and logistical support.”

Cardel’s revenue in the Swiss market is up 40% since Jan. 1, and the company’s goal is an increase of at least 30% for 2013, with hopes to be closer to 40%. “Our main goal is to become, like in France, the local reference for corporate transportation,” Maachi said.