Get Your Game Faces On: It's Showtime! 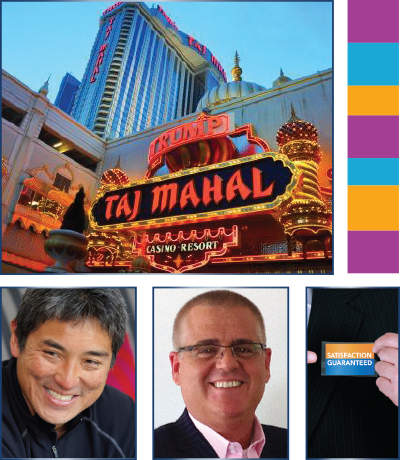 The countdown has transitioned from months to weeks as we quickly approach the first Chauffeur Driven Show this November 3-6 at the Trump Taj Mahal in Atlantic City, N.J. The show is spearheaded by Chauffeur Driven President and Publisher Chris Weiss, Show Manager Megan Hogue, and the Chauffeur Driven team, who collectively have over 100 years of industry experience under their belt. Weiss and Hogue also drew on the expertise and feedback of dozens of industry professionals, who volunteered their time to serve on the various Chauffeur Driven Show committees and advisory board. The result is a show that is packed with timely educational opportunities including hands-on workshops and traditional seminars; nearly 100 of the industry’s leading suppliers, manufacturers, and dealers; and an exciting lineup of nightlife entertainment. A special thanks to Title Sponsor, The Lincoln Motor Company.

Global Alliance: A Story of Consistency, Strength, and Friendship 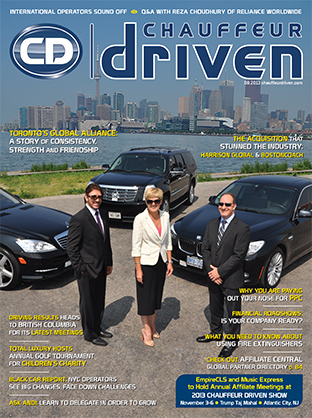 Meet Global Alliance Worldwide Chauffeured Services,one of the oldest and largest transportation companies operating in Ontario. Based in the country’s largest city, the company is focused on high-end corporate work and large events that require the utmost precision and attention to detail. At the center of Global Alliance are its three equal partners—and friends—who have worked well together for more than a decade. This is how they make it work.

If you have any preconceived notions of Canada that include silly references to maple syrup and the ’80s cult classic movie, Strange Brew, it’s probably best to abandon them now. Toronto, Canada’s largest city, is a burgeoning, cosmopolitan metropolis of activity from all sectors of the business world. Comparable to its southern neighbor, New York City, Ontario’s capital is known as the financial center of Canada and is home to numerous companies in financial services, telecommunications, information technology, media, and publishing. The picturesque city on the northern banks of Lake Ontario is also home to a flourishing film industry, which leads to its annual pinnacle industry event—the Toronto International Film Festival. It’s also about an hour and a half from Niagara Falls, one of North America’s most visited natural attractions. Whether you call it T.O. Hogtown, El Toro, or just plain old Toronto, you might be amazed to learn how quickly the city is growing.

The Acquisition that Stunned the Industry: Harrison Global and BostonCoach

On a wicked hot summer day in Boston this past July, Bill Gemmell,a managing partner for ­Harrison Global, addressed—for the first time—the over 200 companies present at the BostonCoach annual affiliate meeting. Just weeks before, details of Harrison Global’s acquisition of BostonCoach were released, a shocking announcement to the industry in what appeared to be a smaller company taking over its much larger competitor. It was a deal several years in the making and the timing had to be right. While there is speculation out there on the financial aspects of the acquisition, the specific details remain confidential.

This isn’t a guppy swallowing a whale tale. Harrison Global is a company that may surprise a lot of people, not only for its size, but for its long history in various forms of ground transportation. David Marcou, one half of the executive team of the Waltham, Mass.-based company, entered the transportation industry through the taxi side back in the mid-’80s. His interest was piqued when a Waltham hotel the company serviced requested regular car service for its customers, and in 1990 Marcou, CEO, and his brother/business partner Derek, COO, officially entered the limousine industry. Through steady work and acquisitions of about a dozen other transportation companies, the Marcous grew the business by diversifying in markets that now include student transportation (700+ vehicles), paratransit (250+ vehicles), executive transportation (200+ vehicles), and taxis (150+ vehicles). The balanced operation includes locations all over New England and in Baltimore, Raleigh/Durham, and the Washington, D.C. areas. The acquisition expands its locations to include Philadelphia, Chicago, and the New York metropolitan area, in addition to hundreds of worldwide affiliates. BostonCoach added over 200 vehicles to the mix. 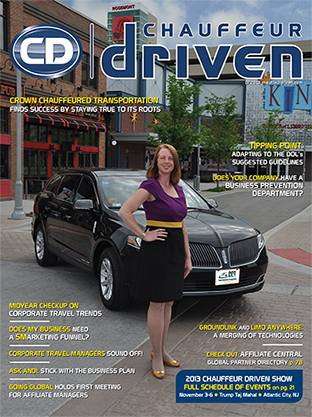 Last year, Mary Paul decided that after over 20 years she was ready to retire. She had, after all, built a successful company with her husband, Matt, and raised her son, Mathias, now a college senior. In March 2012, Paul officially retired ... from the Army Reserves.

Mary Paul, as CEO of Crown Chauffeured Transportation Worldwide (CCT) in Chicago and Master Sergeant in the Army Reserves, had been living a double-duty life. She had served the better part of three decades as a reservist in the military, first as an Army nurse for 12 years and later as a budget analyst working in a training unit for deploying servicemen. When she wasn’t fulfilling her part-time duty to the country she was building the company that she and her husband founded more than 20 years ago.

"In the military, you are always developing leadership and team building skills. the U.S. military has the best leadership schools in the world and I have been lucky enough to have attended some of them. One major element in leadership is you are supposed to accomplish your mission and take care of your people,” she says. “Another skill is influencing others and getting them to do what is necessary by providing purpose, direction, and motivation. This is essential to accomplishing your mission and these principles are easily translated into business.” The essentials of her military training transitioned well in the business world, especially regarding team building and overall organization of the company.

Mary is the face of CCT and Matt is its CFO and all-around vehicle guy, but the daily operations are trusted to Nate Klarkowski, team leader and office manager, and Jamie Stolzenbach, billing and affiliate manager. Having the team in place gives both Pauls the flexibility to be out of the office without the company falling to pieces—a true work-life balance.